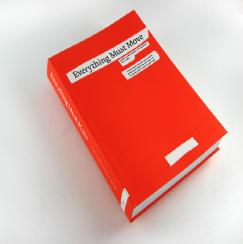 A as in Ambiguity
Just like Stephen Shore’s photos of America, you seem to like places and things that are not just unfinished but what Michael Fried has called “unfinishable.” I sense that you are interested in situations that can never be fixed up. Somehow you like complexities that cannot be expressed simply in terms of “this is good, and that is bad.” It seems that you find these sorts of places and things imaginatively liberating. Combining a surfboard with a bowling ball as a piece of furniture, or provoking us with titles such as “Toxic Ecology,” or spinning other theatrical stories seems to indicate that you are interested in ambiguous and even contradictory constellations (at times positively schizophrenic in character). What gives ambiguity (correct me if I am wrong) so much potential?

The ambiguous has been with me from the very beginning – I never knew for sure who either of my grandfathers was. I am drawn to the enigma that never disappears, why I don’t know.

So what happens when you insert a bowling ball into a surfboard and call the hybrid table a “floor-mouse”? You get (aside from its tableness) at least three other trajectories, each leading away from tabledom – stealing its genus. Ambiguity opens the object to others by diverting the designer’s synthetic intention. But when you try to make it your own, the table figuratively slips away into a bowling alley, or into the tube of a huge wave breaking toward a beach in Hawaii, or into the world of the computer mouse. Meanwhile the supposed table smiles at us ambiguously, Sphinx-like. Because it knows that despite its versatility, it is simultaneously uniquely itself. Slipping out of any orthodox claim on meaning, it belongs to the world.

About the book
Spanning 15 years of propositions for suburban cities, particularly Houston, from the Rice School of Architecture. Everything Must Move is a book documenting over a decade of propositions about the suburban city in general, and Houston in particular. This city-- shapeless, polluted, traffic-clogged, water-logged, limitless--has been a workshop for testing ideas about operating in impossible situations. Everything Must Move is, in many ways, an archival project, however through the infusion of this archival material with new perspectives and projections the project remains poly-vocal, diverse, and open.This new material presented mainly in the form of short essays, written in response to the projects, photographs, and research that form the backbone of the the project that Rice School of Architecture, under the direction of dean Lars Lerup, has undertaken in the last 15 years.