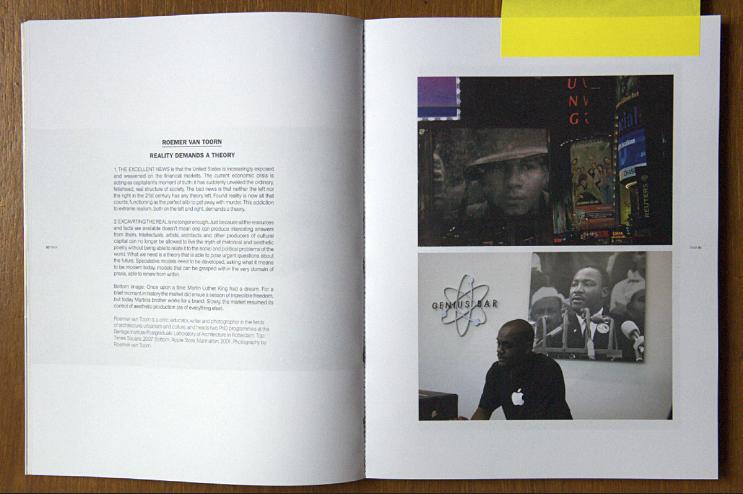 Dear Roemer,Well, we've parcelled out the magazine into three big sections. First is the front section, which I'd like to invite you to contribute to (alongside people like Mrs Prada, Rem, Zizek, etc - we think of you as "friends of Tank" - each of you are getting the same brief). Then there will be a lengthy features section with five pieces discussing themes like War, Belief, etc. Lastly we will have a supersized fashion section in which ten iconic women from the arts and fashion are each given a big interview and shoot. The brief for the front section is as follows:

Tank is 10!
Time flies when you’re having fun and 10 years of Tank have gone faster than we could ever have imagined. To celebrate reaching double figures, we’re creating a special bumper anniversary issue, which is out on September 18. We hope you’ll be there with us for our birthday and beyond.

THE BRIEF: We’d like you to nominate the most significant thing from the past 10 years that will shape your next 10 years. It can be literally anything – a person, an object or an event – just as long as it can be represented photographically. It could be a personal hero, a political leader, an artwork, a sound, a piece of clothing, a film or a building.

THE FORMAT:Each nomination will form a one- or two-page feature in the front section of our 10th anniversary issue. We’d like a brief statement from you as to why you’ve chosen what you’ve chosen. We can work with you to develop a statement or just run a brief quote.

For the image, we’d be delighted if you’d like to photograph it yourself.

The excellent news is that the United States is increasingly exposed and weakened on the financial markets. The current economic crisis acts as capitalism’s moment of truth: it suddenly unveils the ordinary fetishezed real structure of society. The bad news is that both the Left and the Right in our 21st century have no theory left. Reality as found is now all that counts, and functions as the perfect alibi to get away with murder. This addiction to extreme realism, both on the Left and Right, demands a new theory.

Excavating the real is no longer enough. Merely having all the resources and facts available doesn't mean, of itself, that they produce interesting answers. Intellectuals, artists, architects and other producers of cultural capital can no longer live the permanent myth of rhetorical and aesthetic poetry without being able to relate to the social and political problems of the world. What we need is a theory able to pose urgent questions for the future. Speculative models need to be developed; asking what it means to be Modern today, which can be grasped within the very domain of praxis, able to renew from within.